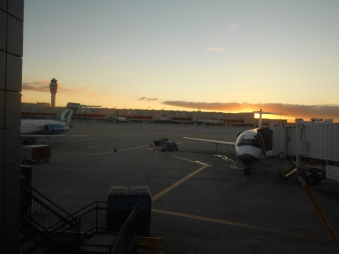 I think that sonder is a realization of reality. It is a reflection on the depth of life, and on the smallness of self. In the Dictionary of Obscure Sorrows (tumblr) and the Urban Dictionary, sonder is defined as

“the realization that each random passerby is living a life as vivid and complex as your own—populated with their own ambitions, friends, routines, worries and inherited craziness—an epic story that continues invisibly around you like an anthill sprawling deep underground, with elaborate passageways to thousands of other lives that you’ll never know existed, in which you might appear only once, as an extra sipping coffee in the background, as a blur of traffic passing on the highway, as a lighted window at dusk.”

Sonder is that passing moment when you see two people kiss, or a parent yell at a child, or a group of people sing “Happy Birthday”, or a man complaining about the long line, or a woman spill coffee on herself, and then you walk away knowing you will never see those people again. But still you wonder about them–about their influence on you, about your influence on them–even though they are only an extra in your background.

Airports are a good place for sonder. I felt it strongly as I stood in the center of the D-terminal at the Hartsfield-Jackson International Airport last week, watching hundreds of people maneuver from their gates to gift shops and Einstein Bagels and escalators and onward. There were Asian people, Indian people, Hispanic people, African American people, Southern people, British people….some were carrying Starbucks, some were dining at the Passports restaurant, some were picking up conversations with random strangers, some were engrossed in their phones, some were holding hands, some were holding crying babies, some were rushing past with briefcases, others (like me) were stumbling, half-carrying, half-dragging my un-wheeled bag from one end of the terminal to the other.

Each of them has an individual story. Happiness and pain. Defining experiences. Dreams.

And to think that I saw them for a fraction of a second, likely never to see them again. But yet I still saw them, and they saw me. To eachother, we are extras in a continuing movie of history that rolls along too quickly to get glimpses of our hearts. Neither of us are stars in the eyes of the world or in the eyes of eachother. We are background noise, one violin in an orchestra,  a single voice in a choir–but we are still there, if only to lock eyes for a moment.